I am fortunate to be friends with an amazing local artist named Ana.  Ana takes her art seriously and recently was part of a group of artists that committed to drawing one thing a day as dictated by the leader of the group.  I had been enjoying seeing Ana’s artwork each day on Facebook until it came to the day that Ana was instructed to draw her “inner critic”. 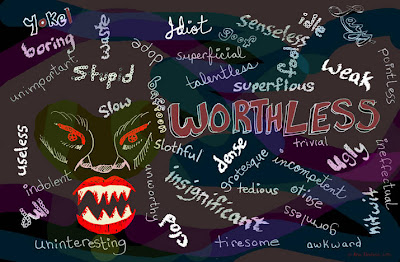 Ana admitted that she doesn’t go to this dark place often but, nevertheless, it’s still there in the recesses of her mind.


However, what happened next was amazing!  Ana’s friends were genuinely offended by the words spoken by her inner critic.  They stood up for her as though they were defending her from a bully.  How dare that “inner critic” say that about our friend Ana!  She is nothing like that!  The picture truly struck a chord with the people that she shared it with.

This is what Ana had to say the next day.  “I think most of us have similar feelings, perhaps not as vividly as I illustrated, but they are in us. I think that is why people were so uncomfortable with my images, especially the inner critic -- it touched a raw nerve with many people.”

I agree completely!  We all have our inner critic; that little voice in our heads that says that we are stupid or ugly or not good enough.  It is a bully that constantly beats us down, if we let it.  We need to recognize that this type of self-talk is destructive and can keep us from achieving our dreams.

The next day Ana posted a very different picture; her inner cheerleader. 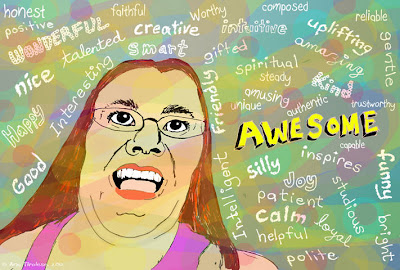 I like this one much more than her inner critic because it is a much better representation of the Ana that I know.

In most cases though, we are our own worst critics.  No one would ever dream of saying to us the things that we say to ourselves in our heads.  And the sad fact is that this kind of self-talk will only make us feel bad about ourselves.

Start to be aware of the negative voices in your head.  You would not allow another person to speak to you like that so don’t allow yourself either.  Each time you think something negative about yourself counter it with a word or two from your inner cheerleader.  Pretty soon you may find that you’re hearing from your cheerleader much more than your critic.  Celebrate who you are; flaws and all!  Nobody is perfect.

I want to say a special thank you to Ana for allowing me to share this story with you.  For me, it very vividly showed how out of tune our inner critic can be with what our friends and family see.  Like I said at the beginning of the post, Ana is a very talented artist and if you are interested in seeing more of her work please check out her amazing site here.